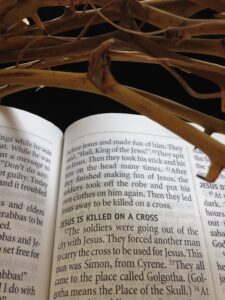 Early on Sunday morning, Mary Magdalene, one of Jesus’s followers, and some other women went to the tomb to put spices onto the body to stop it from smelling. When they got to the tomb, they discovered that the stone had been rolled away from the entrance. They wondered what had happened! Suddenly two men dressed in white robes that glowed appeared in the tomb. The women were very frightened, but the men said “He is not here! He has risen just as he said.” Then the women remembered what Jesus had said.  The women left the tomb and went to tell the other disciples about what had happened. The others did not believe the woman because it sounded like rubbish! But Peter and John got up and ran to the tomb and found it empty with only strips of cloth lying in it. When they saw the empty grave, they believed that Jesus had risen.